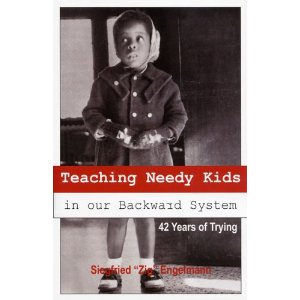 February 2, 2009: Throughout history, adventurers have chronicled their journeys though strange territories to the great benefit of mankind. Marco Polo’s journals introduced the West to the Orient. Columbus’ logs opened the western hemisphere to European exploration. Magellan, Cook, Lewis and Clark, Shackleton … their journals were invaluable to those travelers who came afterwards.

In a similar manner, Dr. Engelmann’s gripping journal of his forty-two year travel through ed land and his novel discoveries and fascinating inventions could serve us well. We may view his book as a travelogue with a wealth of “how to” information for those who may seek to follow him. He guides you successfully around the quicksand of Paiget-spawned mythology and the infamous truth-devouring bandersnatches who inhabit the dark underworlds of the treacherous territory we call our education system.

Or a second perspective of ‘Teaching Needy Kids in Our Backward System’ could be as an informal revelation for the layman of Dr. Engelmann’s theories, now scientifically proven beyond any dispute, which should occupy a place in education similar to Newton’s Principia Mathematica in physics or James Clark Maxwell’s A Dynamical Theory of the Electromagnetic Field dealing with his field equations.

Finally from a third point of view, Engelmann’s ‘Teaching Needy Kids’ could rank with Upton Sinclair’s ‘The Jungle’ which exposed the horrors of the nation’s meat packing industry and resulted in the establishment of the FDA and the closure of many food processors. It could even rank with Abraham Flexner’s ‘Report’ in 1910 that produced a national outcry to revamp the country’s medical standards causing nearly half the country’s medical schools to close.

This entry was posted in Education - K-12, Learning and Education, Politics - US, Reviews. Bookmark the permalink.