Posted on December 19, 2015 by bakeramitchell

In a fit of legislative hocus-pocus, the same Perdue regime which left NC $3.5 billion in debt and cut funding to schools passed Senate Bill 704[i] in the twilight hours of 100 years of Democrat control in May, 2010.

The 553-word SB704, with an ungainly 248-word title, pretends to offer a fix for incompetent local school boards that breed “continually low-performing schools.”   The bill allows a local school board controlling a “continually low-performing school” (CLP school) to “reform” it by one of four “models”: transformation; restart; turnaround; or closure.  The key stipulation in the bill is that regardless of which reform model is chosen, the CLP school remains under the control of the same incompetent local board that allowed the low-performance to persist in the first place. 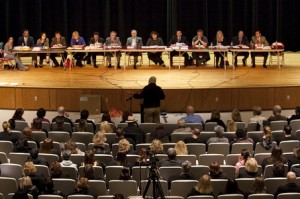 Although thankfully moribund since its passage five years ago, of renewed interest is the “restart” model that would bestow quasi charter-like school status to the CLP school thereby exempting it from certain regulations.  Unlike real charter schools which receive no funding for buildings or other facilities and which must operate on about 70% of the per pupil revenue as do district schools, the restarted CLP school might get a free building, fully 100% of its district funding, and have its overhead and back-office functions provided by the district. Also unlike real charter schools, the law states, “A school operated under this subdivision remains under the control of the local board of education, and employees assigned to the school are employees of the local school administrative unit with the protections provided by G.S. 115C-325” – all of whom created the continual low-performance in the first place.

Alamance Superintendent Bill Harrison has been quoted as saying that funding one or two schools the way charters are funded “could open some opportunities for extended school days, extended calendar, extended employment for some of our people.”

Really?  Take away thirty percent of your district school funding to match the way that charter schools are funded and you could then extend school days, extend the calendar, and extend employment for some people?

But maybe Harrison was not speaking literally when he implied that he would like to be funded as charters are;  maybe he meant that district CLP schools could keep all their extra funds so the state would then have “rich” quasi-charters operated by districts and “poor” real charters operated by volunteer boards.  This arrangement is sure to warm the hearts of the 60,000 families and staff members of the real charters who have struggled under their reduced funding for nearly 20 years.

In general, well-trained teachers using proven curricula with help from knowledgeable coaches are the agents for positive change.  No policy or “model” ever educated a child.  A low-performing traditional district school restarting as a quasi-charter school will just result in a low-performing quasi-charter school so long as the same local board remains in control.  Changing the name over the door will not improve the students’ education.

The solution being tried in Tennessee, Louisiana[ii], and a few other states is to take the CLP school out from under the control of the demonstrably incompetent local district board and place it into a separate state-wide district, which Tennessee calls the “Achievement School District” (ASD)[iii]  .The ASD is administered separately and contracts out the day-to-day operation of each CLPS to management companies with proven track records.

While the results are still out on this ASD concept, it has the potential for allowing real change to occur in the failing schools.  North Carolina should repeal S704 entirely, study the ASD approaches in other states, and craft its own version.  Until control at the top by the local districts breeding these low-performing schools is changed, no substantive improvement will occur for the children trapped in these failed schools.